As the year comes to a close, most people take this time to begin crafting their goals for the New Year and the ways they plan to accomplish those goals. In the midst of that planning, it’s also important to reflect on everything accomplished in the current year.

There’s a lot to celebrate for us, as 2016 brought our Benchmark team several large triumphs.

Let’s take a look at some of them. 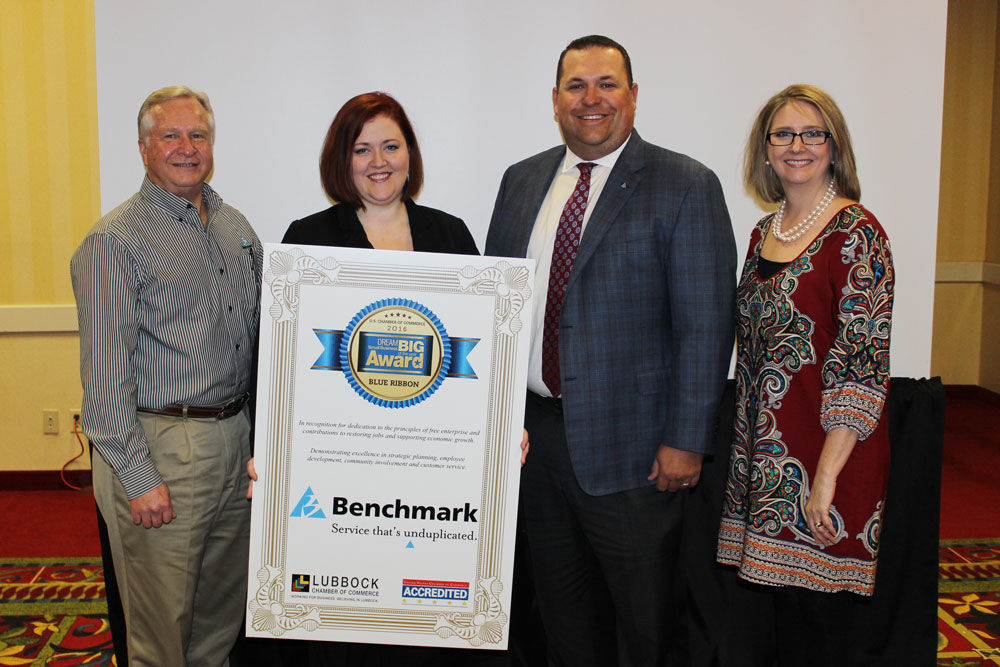 The hard work of our staff did not go unnoticed in the past year, as we were named the #1 Xerox Agency in the country for the sixth time in seven years.

In addition, The U.S. Chamber of Commerce awarded Benchmark with the Blue Ribbon Award for excellence in key categories such as job growth, innovation and opportunity.

The past year also marked major milestones for Benchmark’s digital presence, as several of our social media pages reached the 500-subscriber mark. Social media has served as a means to help Benchmark’s customers stay connected with the company, and provided our employees with the tools to network better than ever before. Both our LinkedIn and Twitter pages gained over 100 new subscribers throughout the year, while Facebook added an additional 51 new page likes.

In the past year, Benchmark expanded its footprint again by adding new offices in Graham, TX and another in Burnet, TX, while celebrating a decade of providing unduplicated service at our Wichita Falls, TX office and five years at our Amarillo, TX office.

The national acknowledgment and company growth that Benchmark has experienced in 2016 alone is a testament to our customers.

Building off of our core principles and our strong tradition of community impact, 2016 was a big year of serving our surrounding communities at Benchmark.

From golf tournaments to volunteer appreciation luncheons, our offices participated in more than 80 events for the year. Our offices attended more than 12 different business expos and professional networking events across the region including events hosted in Lubbock, Abilene, Amarillo, El Paso, Wichita Falls and Las Cruces.

Benchmark is proud to have participated in several luncheons and fundraisers to help advance the causes of various organizations around our region, including the annual March for Babies and the West Texas Rehab Telethon.

Benchmark also participated in events hosted by United Way, the Lubbock Independent School District Foundation, and Texas Tech University each with a mission of strengthening our community ties.

Benchmark’s culture and emphasis on family is a strong proponent behind the success we’ve endured since the beginning, and we strongly believe in celebrating that culture.

Our year began with a Kick-off event hosted in Lubbock, TX. The Kick-Off event is hosted annually over a three-day period to allow our entire Benchmark family to gather and socialize, reflect, and plan for the upcoming business year.

In August, our Mid-Year event took place in Austin, TX with the focus being on finishing the second half of the year even stronger. During Mid-Year employees got to enjoy fun events around Austin like Topgolf and some of the best restaurants in Texas. These two events also allow us the opportunity to honor staff members who have reached milestones at Benchmark, and cordially welcome new members to our team.

Benchmark couldn't function without our diligent staff and to honor those efforts, we host an annual Employee and Family appreciation weekend. The fourth annual BEFAW event was held at Possum Kingdom Lake and featured lots of food, swimming, and socializing for our Benchmark staffers and their family.

During 2016, several of our Benchmark family members celebrated major milestones with the company including Art DeMone marking 20 years with the company, and several others who reached 15 years or more. Company culture is often referred to as a key component to the success of a business and Benchmark is proud to make ‘family’ one of our seven core principles.

Last year was full of surprises and things to remember from our presidential election to the continued development of smart technology.

Similar to years past, Benchmark has weathered all of the ups and downs and is prepared to enjoy a remarkable 2017 with our clients, family, and friends!